More than 40,000 students of the university – one of Germany’s three largest for technical degree courses – study in ten schools. RWTH Aachen University offers research possibilities in the most diverse fields such as natural sciences, computer science, engineering, economics and medicine. In addition, it has numerous cooperation programs with many universities and research centers throughout the world.

The Excellence Initiative of the German federal and state governments provided a huge boost to the further development of RWTH Aachen University. The institutional strategy on which the successful Excellence Initiative application was based has, in the meantime, been expanded to form a long-term strategy to strengthen all the areas of the University and enhance their profiles. In the process it has gained great momentum, which can be seen, among other things, in the extensive building activities.

Visible evidence of this is the RWTH Aachen Campus that is being developed in close cooperation with industry and which is to form one of the largest research campuses in Europe. Students and employees of RWTH Aachen will benefit equally from these developments and are expressly invited to get involved in shaping the individual initiatives.

The many stimulating ideas already have an impact on the whole urban region of Aachen and the entire tri-border area of Germany, Belgium and the Netherlands. An innovative knowledge community is evolving that is closely networked with some of the world’s leading research and industry partners.

RWTH Aachen is a major driving force behind this development. And Aachen, as a liveable and lovable city at the crossroads of three cultures, provides an ideal environment for this creative process of development.

With its 260 institutes in nine faculties, RWTH Aachen is among the leading European scientific and research institutions. 43,721 students in 152 courses of study are registered for the winter semester of 2015/16, including 7,904 international students from 125 countries. Teaching at RWTH Aachen is first and foremost application-oriented. Its graduates are therefore sought-after as junior executives and leaders in business and industry.

National rankings (de) and international assessments attest to the RWTH graduates’ marked ability to handle complex tasks, to solve problems constructively in team work and to take on leadership roles. It is therefore not surprising that many board members of German corporate groups studied at RWTH Aachen. 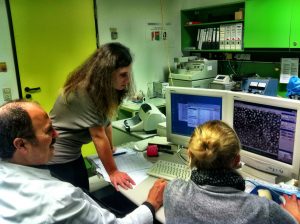 The work of the research centers of RWTH Aachen is closely oriented towards the current needs of industry. This leads to numerous developments that are patented and utilized. The competence centers of RWTH Aachen achieve very effective cross-subject, inter-faculty collaboration in interdisciplinary networks while maintaining a high level of specialization and differentiation into distinct subject areas. This was also the deciding factor for international research institutions, such as Microsoft and Ford, to be set up in the Aachen region

The University’s innovative capacity is further reflected in the high number of business start-ups (currently more than 1,400). As a result, around 32,000 jobs have been created in the region in the last 25 years.

Furthermore, RWTH Aachen is the largest employer and education provider in the region. It will continue to play a decisive role as a driving force in influencing and shaping this high-tech region in the future.

RWTH Aachen has set for itself clearly defined goals. By the year 2020, it aims to be the best German University of technology and one of the top five in Europe as measured by academic output, by the quality of its graduates, and by external funding. It strives to be a leading player in interdisciplinary large-scale research projects. It aims to be an internationally recognized university with lasting excellence in research and teaching that trains outstanding academics and well-qualified young leaders for industry and society in both the national and international context.

In this radical and complex process of reorientation, RWTH Aachen sees itself as a university in which all groups actively contribute to a lasting and open communication culture. All members of the university, including the students, pledge to support a joint high-performance culture: competition is regarded as a constructive aspect of academic life. RWTH Aachen considers this creative culture of change a fundamental principle for innovation and societal progress.

Many new products and processes originate in Aachen. In the research laboratories and testing facilities of RWTH, for example, the first all-metal aircraft was developed, as was the diesel soot filter. This is where the first wind tunnel stood and the first particle accelerator.

This trend-setting innovative capacity and the practical technology transfer to the economic world have a long history in Aachen, the City of Science.

Here the first German Technology Development Center opened in 1982. With its business start-ups and the approximately 32,000 jobs created as a result, Aachen has become the city with the highest density of university spin-offs and engineering offices in Germany.

Science has defined the structural change from a mining area to a technology region and today it is the most important economic factor. More than 50,000 people study and teach at the four universities and colleges in the Aachen region. Because of the academic expertise here, Forschungszentrum Jülich and numerous research centers of international corporate groups have been established in and around Aachen, making the urban region a Silicon Valley at the heart of Europe.

Aachen, known as an “Europastadt” (City of Europe), is Germany’s westernmost major city at whose city boundaries three nations with three languages converge. It is the centre of a dynamic, cross-border knowledge region and stands for world-class university education in Natural Sciences and Engineering.

A total of 7,904 international RWTH students from 125 countries, along with the close contacts the University has with 14,216 registered alumni, as of the 2014/15 winter semester, including 1,846 outside of Germany, give the scientific center of Aachen an international atmosphere.

Teaching and research are also reflected in the image of the city. Thanks to the students and their diverse cultural life, the tradition-rich City of Aachen has a lively and young appearance, particularly in the student quarter of Pontviertel. Its proximity to the Eifel and the Ardennes, to Maastricht and Brussels with their linguistic and cultural distinctiveness, give the city that lies in the shadow of Charlemagne’s palace chapel a particular charm. Anyone who has been here once, according to a study by the Prognos consultancy, keeps coming back…

A strong partner: RWTH Aachen in the TU9 university network

RWTH Aachen University is one of the nine leading technical universities in Germany that together make up the TU9 university network.